Changing your pharmacy approval number can be described as a three step process. These steps can be summarised as:

Step 3. Following the change of the approval number.

Steps 1 and 2 can be managed by the pharmacy. In step 3, Minfos will install the new PKI Certificates.

These steps should be carried out the night before the change, to ensure that the pharmacy can download at least an interim PBS Online report for the last claim under the previous approval number.

Review scripts waiting at the Till and then open a new claim.

Here are 3 suggested options in regards to scripts waiting at the Till:

1. Adjust the re-serialisation configuration: Uncheck the Re-serialise Scripts at Till on Close Claim. Refer to Configuration settings for Claims for more information.

2. Open a new claim and leave the amount owed by the customer at the Till. The PBS contribution for those scripts will be paid under the previous approval number owner/s and the owner/s of the new approval will retain the customer contribution.

Option Two: Owner/s of the new approval number will pass on the customer contribution after the customer has collected the scripts.

1. Charge the uncollected scripts to one single customer account.

3. When the customer comes to pay for their scripts, do an account payment and use the Add Note function to record the customers name.

4. Customer statement or Interim statement can be used to reconcile the amount received to the owner/s of the previous approval number.

Option Three: The owner/s of the new approval number gets all monies associated with scripts waiting at the till.

1. Owner/s of the current approval number deletes the scripts waiting at the till.

The following steps must be carried out before the store starts trading.

1. Close Minfos on ALL workstations (except one) which run Dispense Pro. 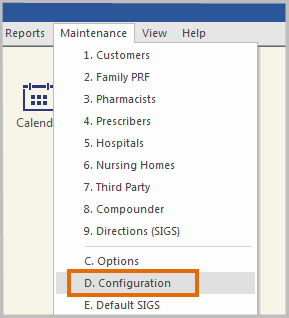 5. Close Minfos on all workstations.

6. Re-open Minfos and navigate to Dispense Pro. Click the Maintenance menu, select D. Configuration and check that the approval number has saved correctly.

8. Dispense an original script and check that the approval number has changed correctly.

9. Contact Medicare and request them to activate the new approval number.

Step 3. Following the change of the approval number.

These steps should be carried out after the approval number change process is completed and the store has a valid NASH PKI Certificate.

1. The pharmacy has a valid NASH PKI Certificate.

5. Select the option This is a re-registration because the pharmacy has already been using eRx and has changed to a new approval number.

6. Supply the remainder of the requested information.

7. When eRx has processed the registration, they will automatically notify Minfos which will generate an Incident.

8. Minfos will call back regarding that Incident.

10. Minfos will provide eRx with the Thumbprint from the new PKI Certificate.

11. The eRx will use the new Certificate Thumbprint and register the eRx gateway.

Was this page helpful?

Did you find it helpful? Yes No

Send feedback
Sorry we couldn't be helpful. Help us improve this article with your feedback.